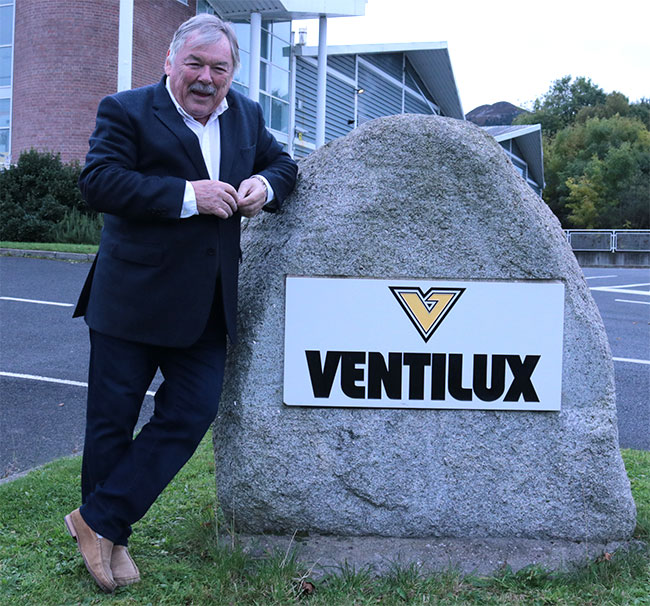 Announcing his retirement as managing director of Ventilux, Brendan Walsh shares some insights into the development of a business that is regarded by many as one of the most successful companies in the Irish Electrical industry.

Founded in 1986 Ventilux is a specialist in the design and manufacture of an extensive range of Emergency Lighting, Central Battery Systems, Luminaire Conversion Equipment, Nurse Call and other safety systems.  The success of the business is evident in its recent move to purpose built 35,000sq.ft.premises in Bray where over 80 staff are currently employed.  In addition the company employs 20 operatives in its UK branch in Liverpool. A brand leader in Ireland, exports to Britain and the Middle-East still account for 50% of overall sales.

Raised in Donnybrook, Dublin with five brothers and two sisters, Brendan always maintained an interest in training and self- improvement.  Graduating with an honours degree in Electrical Engineering, he began his career in the specialist area of Nuclear Electronic Measurement and Control Systems within the Tobacco Industry.  His area of responsibility was mainland Europe, and his primary objective was to introduce advanced measurement methods which reduced waste and improved product quality. He further developed his skills and experience in the highly competitive gas industry introducing new and innovative systems for organisations such as BOC Gas.

In 1986 John Egan (who also ran EWL in Fenian Street) invited Brendan to join him in the foundation of Ventilux as an emergency lighting company.  After a short period of time working with John, Brendan took over the business. Concentrating on innovative product design and creating products that were in demand from architects and interior designers the business grew rapidly.  Brendan revolutionised the concept of testing with innovations such as Netcom 5.  This product was used extensively on the railways in and around Liverpool. The drive to design and manufacture technically superior products along with a growing network of International distributors, gave Ventilux a strong position in the marketplace.  Realising the need for people skills in this new venture, Brendan pursued and obtained a Master’s in Behavioural Science.

Brendan studied closely how to do business in the Middle Eastern countries and the unique requirements of that market.  A German company commissioned Ventilux to develop a special inverter product that became hugely successful and was installed in business all over the Middle East. This German company is still one of their biggest customers today.

Brendan’s work ethic is simple; “always try to be trustworthy and honest with both customers and employees and respect people with similar traits”.  Technical excellence and a desire to work closely with the customer is still as important for Ventilux today as it ever was.

Brendan is still involved in the business, assuming the role of Group Chairman and passing the baton of management to son Ian.  Other members of the family, Barrie, Ryan, Claire and Marcus are also involved in the management of the business.  Brendan sees his future involvement with the company as more of an advisory role that may permit a little more leisure time to allow him to see a little more of the world.