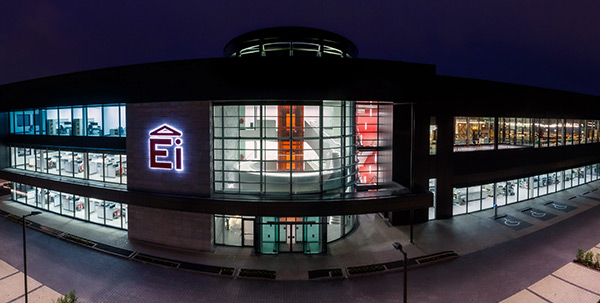 The new Headquarters Building on the existing Ei Campus comprises a 10,000m2 facility. It includes significant additional manufacturing capacity, Research and Development, and office space. The expansion underpins a strategy of maintaining 100% of manufacturing in Shannon, in addition to the co-location of other key functions on a single site.

Commenting on the announcement at the Ei Electronics Campus in Shannon, Taoiseach Micheál Martin said: “I’m pleased to be here to witness first-hand the continued expansion of Ei Electronics, one of Ireland’s largest and most successful manufacturing and electronic companies. For over five decades the company has been a remarkable contribution to Shannon and the Mid-West region and its ambitious plans for future growth and job creation are very welcome.

Ei Electronics is an outstanding Irish-owned company creating solutions with a global reach and I commend Michael and his team on today’s milestone announcement.”

With a turnover in 2021 of circa €320m, and 1,100 employees worldwide, Ei Electronics
www.eielectronics.com. commands a leadership position globally as a manufacturer of residential fire and gas detection products.

The Company is 100% Irish owned, and is in existence for over 55 years. Over 30 years ago it became a fully-fledged Irish Company after a management buy-out from General Electric in 1988. Today Ei Electronics is one of the most significant employers in Ireland’s Midwest.

Ei CEO Michael Guinee added, “We are delighted to welcome An Taoiseach for what is another milestone in Ei’s long history. Today we embark on our next phase of growth, on the site in Shannon we have occupied for over 55 years.  This building is a testament to the dedication of very many people over several decades, built on a strong culture of loyalty, respect, commitment and long service.”

The Company’s Irish sales operation www.eielectronics.ie had grown steadily in recent years, occupying a leadership position and the supplier of choice for installers and wholesalers alike.

Ireland Country Manager, Tom Meehan said “The new state-of-the-art facility here in Shannon means a bright future for our loyal Irish customer base.  The additional manufacturing capacity will position our Irish sales and support team to offer Irish customers best in class support and service into the future. In line with our Sustainability strategy, the building is also one of the first Near Zero Energy Buildings (NZEB)  in Shannon.”

Ei ranks as one of Ireland’s largest indigenous manufacturing and exporting electronics Companies. It occupies a 32,000m2 campus in Shannon where all business functions are headquartered; R&D, Sales and Marketing, Manufacturing, Customer Service and Finance & Admin.

With customers in over 30 countries worldwide, Ei also employs an additional 100 people in its 5 wholly owned overseas subsidiaries in the UK, Germany, France, the USA and Poland, bringing total headcount today to over 1,100.  Over 90% of turnover is accounted for by exports, the primary overseas markets today being the UK, Germany, USA, The Netherlands and Australia.

The Company has also recently completed the expansion of its Shannon Campus. The new development comprises a 3 storey, 10,000m2 building adjoining its existing headquarters.  It includes additional manufacturing capacity, R&D, and office space, to significantly expand its current production capacity. The expansion plans underpin a strategy of maintaining 100% of manufacturing in Shannon, in addition to the co-location of other key functions on a single site.

January 2020 saw the opening of its new UK Headquarters in Oswestry, Shropshire.  This also co-incided with the 30th anniversary of Ei’s UK subsidiary Aico. This came on the back of an expansion of Ei’s German facility in 2019.

July 2020 saw the acquisition of Bristol based Company HomeLINK to further expand Ei’s footprint in the Connected Home and IOT arena. A suite of Environmental Sensor solutions developed jointly by Ei and HomeLINK were brought to market in the middle of 2021.

Over the years the Ei has added a range of value-added monitoring, management and data extraction software tools to its product suite to enable interconnectivity between devices and local and remote control of complete installations. The most recent Gateway and Remote Inspection product launches mark the transition to the cloud-based management of systems, further increasing ease of management and compliance, and reducing overall cost of ownership.

Ei’s fire detection and carbon monoxide products have been keeping families safe in their homes for generations – both in Ireland and globally. Today, as the Company embarks on its next phase of double digit growth, its core sensor technology will ensure it remains at the forefront of emerging cloud-based “Connected Home” and IOT developments.